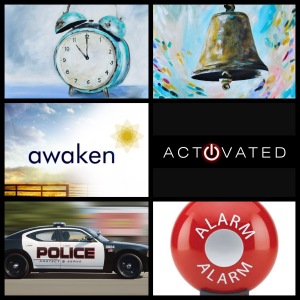 While Lela and I were driving to the church, we began sharing what the Lord had been speaking to us.  The word He had given Lela was awaken and mine was activate.  We both had pictures Mindi had painted during reviveOH as our backgrounds on our phones that reflected these words.  As we began looking at the pictures, we recognized hers showed we were in the 11th hour.  I explained that I heard the church bell chime 12 and Mindi confirmed we have now entered into a new time.  As we were talking about this, we noticed a police car pull out in front of us. On ahead, we saw a traffic light with both yellow and red flashing at the same time.  We discussed how we thought He was trying to caution us because my alarm on my phone suddenly went off.  I then noticed the bouquet of 5 pink flowers and 1 white flower on the windshield and explained it reminded me the painting Pam had given me consisting of 12 pink flowers.  Lela stated, 12 represented government…and we just had a new president elected on the 20th.

On our way to a fundraising event Lela shared what she had learned after studying these words.  Both Activate and Awaken are 3rd person present…meaning the Holy Spirit is with us. The 11th hour represents there is an urgency for His return.  The alarm confirmed we can not wait, the time is NOW!  The bouquet of 5 pink flowers represent “hey” – it’s a window of grace…and the 1 white represents an ox or a bull, which stands for strength and leader.

In conclusion…It’s time to wake up.  It’s the 11th hour.  The time is near.  Don’t worry, go with protection.  Just be cautious.  The alarm is sounding.  There is a window of grace. Awaken and go!