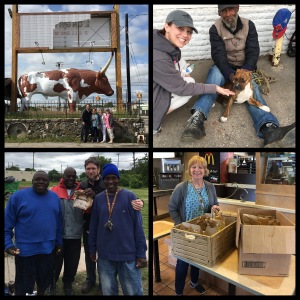 This was the first morning I actually went out in Dallas!  Wow, wow, wow!  Our first stop was a gas station.  The owner allowed us to pray for him and his staff.  He was encouraged and uplifted!  We left him excited about what was taking place with reviveTX!

Next, we stopped to ask a gentleman for directions to the homeless community.  We ended up praying for him.  Dennis shared a word He received from the Lord.  He encouraged the gentleman to anoint the corners of his neighborhood with oil and prayer walk around it. Pam shared she had a vision of the people who were now ridiculing him were going to be the very ones who would begin coming to him for counsel in the near future.   How awesome is God?

We found the homeless community.  For several blocks we saw nothing but people walking the streets, pushing grocery carts with their belongings, pulling suit cases, or sitting on the back of cars/homes that contained everything they owned.  We prayed with a group of about ten and ended up buying them a hot meal from the closest restaurant. It hurt my heart to see their living conditions, but it was encouraging because they were believers and knew God had them right in the palm of His hand!