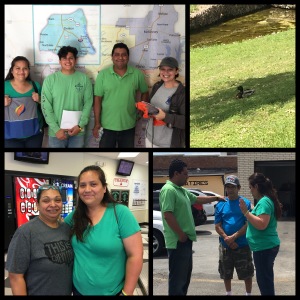 So how fun is it to go out on a team where you are the only one who’s primary language is English!?!   It opened my eyes to how Spanish speaking people feel around us English speaking folk!  However, they were very good to include me when I gave them a puzzled look!

The first place we stopped at was a laundry mat.  The guys headed out and me and Liliana began ministering to Velma.  Velma and several other ladies were believers, but appreciated the encouragement.  The first person the guys prayed for received Christ as their Savior!  GLORY!From there, we went to the library.  We were unsuccessful at getting permission to pray for people inside, but outside we ran into three homeless people roaming around there. Two of them came to eat lunch with us and the church referred them to community resources that could assist them with their basic needs.  I loved that they were not only spiritually fed today, but also physically fed too!  One mother shared the Salvation Army doesn’t accept children, but she had to leave before we could find out another place for her to go. My prayer is that I will find out another resource and refer her myself!

While we were wondering around behind the building, we saw a sitting dick.  I jokingly stated that probably represents something.  Isaack stated his baseball coach used to tell his team that sitting ducks represent someone who was vulnerable to an attack…I felt the Lord was saying we have the advantage and we needed assist the lost so they are no longer Satan’s prey!