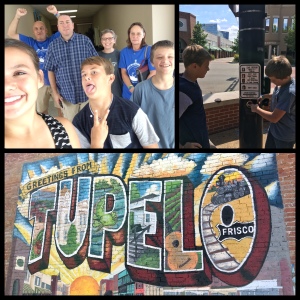 Today, instead of the Anchor Church sitting in pews, we were the church and got out of the building!  15 teams of 4 hit the streets of Tupelo to share Christ’s love.  7 people made Jesus their personal Lord and savior and my team had an encounter with someone I will never forget!

Before we began our adventure, we prayed for clarity and direction.  I saw a vision of rushing water.  Jamie commented he noticed the bank downtown had a fountain, so we decided we would head that direction after eating lunch.  Jamie’s daughter wanted to go to Connie’s chicken and to say it was busy would be an understatement.  However, the Lord used this time to line everything and everyone up.

After leaving the restaurant, we headed towards the bank.  We made two blocks and noticed a gentleman wearing a blue shirt a crossed the street at his work truck.  Neil thought it was someone from our church as we just got new blue church shirts this morning .  I told Neil to pull over so we could pray with him.

As we approached him, I told him he looked familiar and he stated he used to go to West Jackson and Bissell Baptist.  During conversation, we discovered we knew some of his family members and close friends.  He openly disclosed how his two sons had committed suicide this past year and it has caused a lot of tension between him and his wife.  We prayed for reconciliation and healing.

We walked up the street and prayer walked over a dark corner.  As we headed back to the car, the gentleman motioned for Neil to come back over to him.  He explained when we approached him, he had just finished power washing and had every intention of going straight to his son’s gravestone and shooting himself.  He stated after our prayer and conversation, he knew the Lord has bigger plans for him as he wants to lead a support group (at CR) for parents who have lost their children to suicide.

We all stood in awe of how the Lord orchestrated us meeting this gentleman!  If it hadn’t been for the long line at Connie’s, he would have still been inside working inside and our paths wouldn’t have crossed.  It took my vision of seeing rushing water to get Jamie’s idea of going to the bank with the fountain.  In addition, the Lord used Neil seeing the blue shirt and as he shared the testimony, we all realized at the same time that he was power washing…which tied it all back to rushing water!  Oh I love our God adventures!  Thank you Lord for letting me be a part of your work!