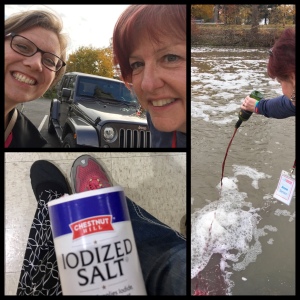 During prayer, the Lord brought to my remembrance the waterfall at Blanchard River and my classmate’s father dying as he was searching for some youth who drown as they went over it in a canoe.  Then, I heard  the Lord say “blood atonement.”  In obedience, Ann and I poured a bottle of wine into the river to represent His blood as we decreed life over death!  We also proclaimed Isaiah 62 and Psalms 91:1 over the land and water.

Next, I envisioned myself marching around the very building that was hosting reviveOHIO this week as a three year old.  He revealed He was equipping me even then to prayer walk and gain back His land the enemy had stolen.  He showed me I was to walk around it again today with His spiritual salt.  Ann and I walked around the building three times as we prayed and decreed healing of souls, families, the community and state.  We also prayed for non believers to have a thirst for His living water like never before so they would come to salvation, amen?  Talk about coming full circle, huh?  Starting as a child to now being His warrior!