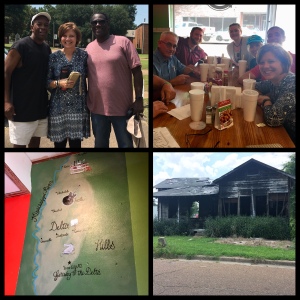 I had the privilege of going out with two locals today.  As we prayed for direction, the Lord gave me a vision of a left foot.  Neither one of them had any idea of a place this might pertain to, so we just began driving.  We noticed a female on a bike with a bright colored shirt and the word love on it.  We got out of the vehicle and I was able to pray for her.  I gave her a hug and remind her she is loved by the King, and she is never alone.

We ended up walking down the road and stopping in front of a group of 5 people sitting in front of an abandoned house.  The pastor in our group prayed with one of the gentlemen and arranged to meet with him on a weekly basis for discipleship.

I connected with the female and prayed for her.  As we were just talking, a puppy began licking another gentleman’s left foot.  He said something about it not being sanitary and I noticed he had a bandage on it.  The pastor joined us and explained they went to school together as children.  We prayed for the healing of his foot and the pastor agreed to follow up with him too.  He admitted he thought the word “left foot” was strange when I first released it, but knew it was of the Lord after our encounter!  I love how the Lord confirmed we were in the midst of His will for us today!