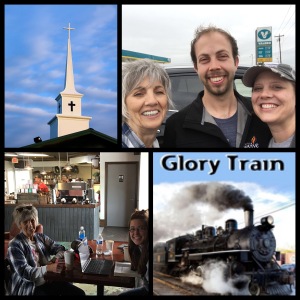 This morning, Mary Frances and I went to a church and ended up praying with and for the entire staff!  It was fun to see them get excited as we shared testimonies.  They began thinking about who they could contact to help us get into schools and businesses!  Go God!

From there, we went and met Laban at Bev’s. When we arrived, Laban said he was out of his comfort zone.  He stated he had just been sitting in the booth with his coffee cup in hand shaking like a leaf.  Once we prayed over him, he transformed right before our very eyes.  He immediately jumped out up and prayed with a gentleman sitting in the booth next to us.  He ended up getting the gentleman’s number so he could begin the discipleship process with him!  How awesome is that?  While we were there, Bev gave us the contact information of the leader of FCS to help us get into the schools in Ponder! The Lord is moving in mighty ways!

That afternoon, we went to Zera’s coffeehouse, it was a neat environment.  While we were talking, the train whistle began to blow.  KJ said it was a glory train.  She explained when ever the whistle sounds, something significant happens in the spiritual realm! Chew Chew!