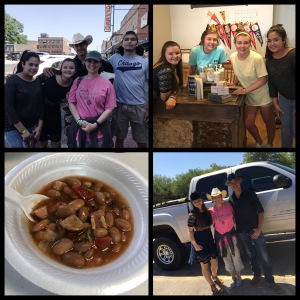 This morning I had the privilege of going out with four teens!  I was amazed at their boldness and willingness to pray and share the Gospel with total strangers!  They were also more than hospitable.  They played country music as we rode in a pick up truck and later took this picture with our cowboy hats on! I truly felt at home in good ole Texas!

We decided we needed to go to the square in downtown Denton.  We ran into another TTR team and Cy shared with me that he had just seen Robin again.  Cy stated Robin told him he began running after we got into the car the other day and Cy noticed his anger had dissipated!  Thank you Jesus for healing Robin!!

We had several people tell us no they didn’t want prayer, but that didn’t deter them from trying again.  The guys went one way and us girls went another. Once we met back up with the rest of the team, we took time to pray for each others special requests and closed out with the Lord’s prayer!  What a beautiful morning!