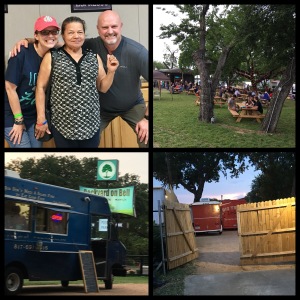 The Lord continues stretching me!  Our team was asked to give a word to three of the traveling team members.  I was nervous, so asked for counsel about how to begin this process.  It was suggested to ask the Lord to give me an animal for each individual.  Then, request for the Lord to reveal what characteristics about the animal related to them.  It was really neat how they unfolded. After I was given an animal, the Lord highlighted several characteristics about them, and the descriptions led to a scripture!  Wow!

Our region went out to hit the streets tonight.  I had the opportunity to go with Marie and John.  After sharing about ourselves, I learned John was the individual who makes all the bands and Bibles for TTR!  It was fun hearing how Kyle and John began their partnership and seeing a sample of the new TTR Bible!

My team ended up at Backyard on Bell.  I realized it was the same location another team and I ended up several weeks ago.  Only this time, the gate was open and we went inside! We prayed for someone who was running for office, but his wife and daughter told us no.  We prayed for multiple other individuals, but didn’t feel led to share the Gospel.  The weather was expected to get bad…confirmation of the spiritual warfare we were experiencing!  We are not going to back down, but we are going to continue to press forward!