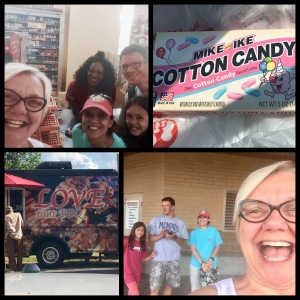 The first ever reviveMEMPHIS just happened! On the way to meet Tripp and his daughter, Lela and I were observing the sky and noticed a cloud in the shape of a pig.  I laughed and stated the Lord is telling me I eat too much!

Once we got to Memphis, the team decided to eat.  As we prayed, I got a vision of a red heart and yellow and black lines.  I immediately thought of Loves, but knew with Tripp’s daughter with us, it wasn’t the appropriate time.As we left the restaurant we headed a crossed the street to pray for a FedEx driver. However, the truck had already gone due to the heavy traffic.  We parked in the donut shop parking lot to get another game plan and noticed numerous people going in and out of the Dollar General.  We decided to start there.

We began praying for the cashier and several customers came up to pay.  As we were standing there to continue praying, Omar caught my eye.  The line continued getting longer, so I went to find Omar.  He and his sister Israel were in the soda aisle.  When I asked Israel how we could pray for them she stated she was about to go and burn down a house.  Lela said great, let’s pray for Israel’s peace.  Israel didn’t skip a beat and shared her piece was in the car and she was about to kill the pit bull that attacked her brother.  After giving Israel a chance to release her frustrations, I had an opportunity to pray for her brother individually.  My spirit recognized the Holy Spirit within him.  He held his hands out in a receiving position as I prayed a hedge of protection around him.  The Lord allowed me to feel His love towards him.  I was thankful the Lord allowed me to feel LOVE instead of darkness.

While Lela and I were waiting for Tripp and his daughter, we prayed for a gentleman in the parking lot.  Lela asked if I noticed him putting a gun in his car door.  I had my eyes closed.  Lesson learned, keep my eyes open and alert while out in the streets!

After we said our goodbyes, Lela asked if I wanted to head towards the Loves in Memphis or go to the one in New Albany.  I saw a church van saying “Faith” and I told her to follow the van.  Back to Tupelo we headed.  We stopped in New Albany at a gas station.  I looked up and realized it wasn’t Loves, but it did have the same colors as the vision I had earlier.  We began looking for someone with a heart on either their shirt or a tattoo.

As I was getting a cup of coffee, Lela noticed the cashier with an arrow pointing to a customer.  I got in line and the arrow was pointing at the person standing in front of me who had not only one heart tattoo, but two!  One of the hearts had wings. We were able to pray for her circumstances of getting her car back so she can keep her new bob.  Then, we prayed with the gentleman washing windows.  We are believing he was healed.  I was able to tell him the Lord was well pleased with him.  He beamed and left him encouraged.

On the way to Lela’s friend’s house, we saw a LOVE BBQ truck.  We prayed blessing for the family and their business.  On their menu was a picture of a pig with wings.  We knew we were exactly where the Lord wanted us!

Lela and I also had an opportunity to  lead her friend through an inner healing session. That makes for two days in a row!  Love it and love God!  What a beautiful day!