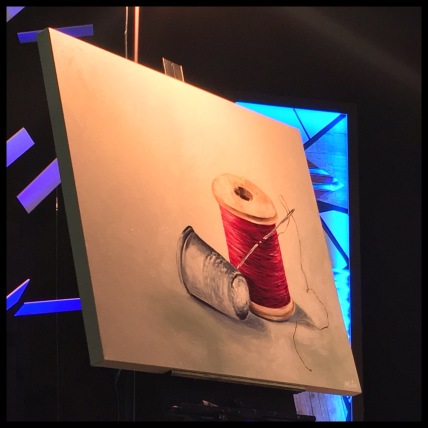 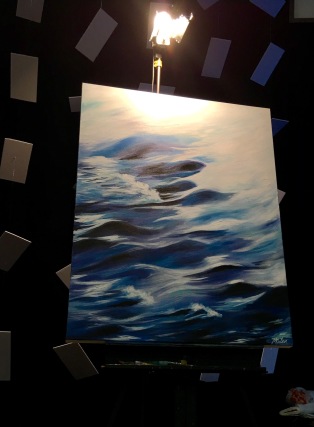 This morning during prayer, Mindi explained the picture she painted last night.  The needle and red thread represented mending and the thimble represented protection. When I took a moment and studied the spool, I got a vision of the red cross.  What a neat example of what we do in this ministry. We go out and reach people right were they are; often in the midst of a life emergency! I loved that the thimble was silver; a perfect illustration of God’s armor.  I took it to heart because it has been spoken over me that I would be invisible to the enemy because he would only see a reflection of himself in the armor.  How neat is that?

As we actually began praying this morning, someone spoke into me saying “because of past hurts in my life, I am insecure.  The Lord wants to restore and heal these parts of my heart so I can receive even more of Him.”  I jumped up and down, as I had an inner healing appointment scheduled with Cherry after breakfast!  Come on God, come on!!! Talk about perfect timing.

I shared with Cherry what people had said about forgiveness and past hurts that still needed mending in my heart.  She started the session by asking the Holy Spirit what I hadn’t forgiven and the Lord showed me nothing but black.  As soon as I vocalized that, we both knew I needed to forgive myself and it was my own words that harmed me.

The Lord revealed to me that I haven’t forgiven myself for marrying my first husband. He showed me when I agreed with the lie that I was inadequate, I was stupid, and I was insignificant.  As Cherry asked for Him to reveal where He was during these incidents, He showed me He was the water in the shower comforting me, in the wind that blew on me as I sat in the window, and He was the white comforter (covering me with His righteousness) that I placed over myself.  He then revealed Himself as the ocean and the waves that washed over me, reminding me I am forgiven and He is more than enough.

As we prayed for deliverance of depression, power/control, and critical spirit the Lord showed me I had made these spirits large when they were only as small as ants.  He also divulged there were a number of them disguising themselves, wanting me to believe there was only one.

When we concluded our time together, I realized the blackness was the bottom of a well and because I had emptied myself, He was able to fill it up with His living water.  I love that He used water to show me where He was through some of the most difficult things that I have experienced.  He also gave me numerous several different visions of eyes.  I realize He was giving me an opportunity to see things from His perspective.  Tonight, Mindi painted the body of water…oh how I love how He shows His love for us!