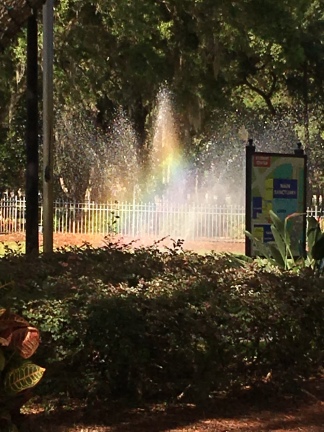 This afternoon my prayer group took a break and sat around the pond.  The Pastor shared several tidbits of valuable information I don’t want to forget!

He mentioned the importance of walking barefoot in the grass.  He stated it gets you grounded and removes toxins from your body.  This brought to my remembrance Psalm 23:2.

He shared how his father was a fisherman in the Caribbean and taught him many neat lessons.  He explained they knew if there was going to be a hurricane depending on wether or not there was  dirt on the plants.  He clarified if there was no dirt the water was hot so the winds would blow and cause moisture to build.  If this was the case, they knew bad weather was in store.  However, if there was dirt that blew in from Africa, they would not tropical storms.  He shared the dirt might have been a nescience, but it meant better weather and it brought nutrients to their plants!

He discussed the dangers of the ocean.  He stated that there were islands all around and many people would crash into them because they were just below the surface.  He stated it can really be deceiving if you weren’t familiar to the area.  He also said each island has 2 oceans touching it, one on each side.

He shared how his father would fish out of a small boat.  He would put our white bottle jugs that would go underwater.  He said they would leave the nets there for several days and he would go and help his dad retrieve the nets.  He stated his dad would go to a set point and then calculate the undercurrent so he could find out where they had drifted.  The pastor admitted he was amazed that his father always pointed him to the exact location of where to find the nets.  It is a dying trade.

After this story, we prayed for an awakening of the church.  For all bodies of believers become fishers of men.  That sharing the Gospel is not a dying trade, but a new way of living!  As we were sitting there; we fed the turtles and fish.  We observes the more we fed them, the more fish came.  Our prayer was the more we went out, the more people would become attracted to the bread of life; resulting in more and more people coming  to know Jesus as their Lord and Savior.