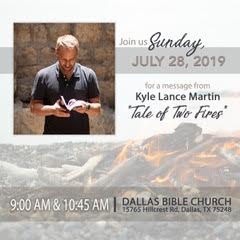 A few weeks ago Laura Martin asked for each of the TTR team to give Kyle a word of encouragement for his 40th birthday.  As I prayed, I heard the Lord say “coal.”  I didn’t like that word so I decided I would come back to it and pray about it later.  A few days passed and I began praying again for the Lord to give me a word for Kyle.  I could just envision the Lord shaking His head at me as He prompted me by saying, “why are you asking Me for another word after I already gave you one…coal?”

UGH!  I began a dialogue with Him…Why me Lord…why not a pretty word..why does it have to be something nobody wants in their stocking…Kyle already thinks I am strange…and He replied…My thoughts are higher than your thoughts (Isaiah 55:8) and I am the giver of good gifts (James 1:17).  So reluctantly, I surrendered and trusted.

I felt led to ponder about where coal was found…you have to dig for it…it’s not surface level.  It’s hidden, just as we have hidden His Word in our hearts. I believe He was revealing Kyle’s faith isn’t surface level, it’s deep.  He brought Romans 10:17 to mind.  As I continued “digging” through facts, I discovered coal makes up 40% (40th birthday) of the world’s power and energy…and the Lord uses pressure to create coal from dead plants….just as He can use what He’s pruned off of us for His glory…pretty cool stuff!

After reviewing what I had written down from my research, I believe I got a portion of what the Lord was wanting me to release to Kyle…As Kyle has been digging into God’s Word, He is taking him deeper into Himself and He is giving Kyle new power, energy and revelation as he moves into this new season of his life, amen?

Well…yesterday, I found out Kyle was asked to preach at his home church and the topic is “A Tale of Two Fires.”  Included in the message he will be talking about coal, how cool is that?  I stand in awe of our Savior!  I thank You Lord for Your confirmation that I am hearing correctly and for blessing me (even though it wasn’t necessary) for my obedience!